I’ve recently been watching several patches of lungwort (Pulmonaria) in different parts of the town. It’s one of my favourite spring flowers bringing much needed early splashes of colour as well as food for the few bees out and about. I’ve found some of the common form with its pink and blue flowers and dappled green leaves. The Leechwell Garden also has three other cultivars, one with deep blue flowers, another with smaller white flowers and a large patch with coral pink flowers, some tinged with blue.

The common form of lungwort (Pulmonaria officinalis) grows wild over much of mainland Europe but it has been naturalised in Britain for many years. The oval, fleshy green leaves are decorated with silver grey spots and grow in a jumble near the ground. In early spring the plant launches volleys of brightly coloured trumpet-shaped flowers carried on sturdy stems. The immature flowers are a deep reddish pink fading to a paler pink as they grow and mature. The flower colour changes again as it ages, this time to a mauvish blue so a vigorous plant may carry two or three principal shades of flower.  On a large clump of the plant the flowers shimmer and dance in the cool breezes that predominate at this time of year, creating a haze of strong colour.

There’s an interesting chemical story behind the flower colour change which may transport you back to school chemistry lessons and messing around with litmus paper. The flowers of common lungwort (Pulmonaria officinalis) contain coloured pigments (anthocyanins) that are sensitive to acidity. As the flower ages, there is a change in the pH (a measure of acidity or alkalinity) and the pigments change colour accordingly. The young flowers are acid and their colour is red or pink. As they mature the acidity drops and the flowers eventually turn blue.

But this is more than a chemical curiosity, the colour change is a signal to pollinators. The pink colour tells pollinators that the flower has plenty of nectar whereas the blue says “don’t bother”. Hence pollinators don’t waste time visiting low-nectar blooms and they may visit several plants looking for high nectar flowers increasing the chance of cross pollination. This, of course, raises the question of what happens in cultivars where the flower colour does not change.

It is widely reported that early botanists saw a resemblance between spotty lungwort leaves and diseased, ulcerated lungs. That’s how the name, lungwort and its Latin equivalent, Pulmonaria are supposed to have arisen. I would like to know more about this resemblance because I have no idea what “diseased, ulcerated” lungs look like. I tried to find pictures but that didn’t help either. I wonder which lung disease these early botanists, who were also physicians, were thinking of?

The apparent resemblance between the spotty leaves and diseased lungs also led medieval physicians to use lungwort preparations to treat respiratory conditions. Indeed lungwort has a long tradition of medicinal use and “officinalis” refers to this. In his 17th century herbal, Culpeper asserts: “It is of great use in diseases of the lungs” and to this day, herbalists use extracts of the plant to treat coughs and bronchitis.

The connection between lungwort leaves and diseased lungs did not impress everyone and the plant has a host of other common names of different provenance. Some refer to the Virgin Mary or where she lived, hence the names Our Lady’s Milk Drops, Mary Spilt the Milk and Jerusalem Cowslip. Another name is Soldiers and Sailors which makes a link between the flower colours and the red and blue uniforms of the army and the navy.

But what about those pollinators that are being lured by the siren-colours of lungwort flowers? I’ve seen honey bees and I’ve seen one small bumblebee which I guess is a worker based on its size. But what I’ve been waiting for is Anthophora plumipes or the Hairy-footed Flower Bee and I saw my first one, a male, on March 17. These are fairly large furry bees, the males who emerge first being gingery and the females black. They love lungwort and most days now when I go to see the Leechwell Garden lungwort I am rewarded by the sight of a male with his pale face and characteristic restless, staccato flight pattern. These Anthophora move quickly from flower to flower often buzzing loudly as they go and making it very difficult to take photos. Sometimes they disappear when I arrive but they also sometimes come to have a look; they hover near me, move in a straight line to another spot, hover again and repeat this behaviour around me until satisfied.

There must be plenty of these solitary bees about for me to see them so easily, unless of course it’s a few very busy bees. So far I have seen no females, but when I do, I will update this.

Update:  I finally saw a black female on some primroses on April 12th.   Ironically it was in our back garden, although we are quite close the the Leechwell Garden. 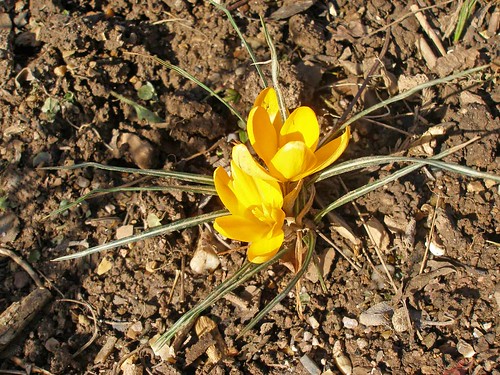 It’s nearly a year now since I began watching some solitary mason bees (probably Osmia bicornis) in the Leechwell Garden, the community garden in the heart of Totnes. I was entranced as I watched the mated females building their nests in the removable tubes and in the holes in the wooden block of the fine Bug House attached to one of the old walls. They taught me so much about the life of a solitary bee.

The Leechwell Garden is a public space and the Bug House is meant to be educational so it is understood that there will be a certain level of attrition. Sometimes visitors disturb the removable tubes and a few have been knocked to the ground (the tubes that is!). Last summer about half of the filled tubes were taken which is a pity as the developing bees probably did not survive. Anyway, by the autumn of 2014 there were about 30 filled removable tubes still left and I began to wonder whether they would make it through the winter.

I thought long and hard about what to do and decided it would be better to store the tubes somewhere safer. They need to stay cool all winter so I put them in our shed which is not attached to the house. I carefully noted which was the front end of the tubes and stored them in a cardboard box with holes to allow air to circulate. I waited until October 15th last year to do this so that the bees had entered the pupal stage and would not be damaged by moving. The nests in the wooden block, of course, stayed with the Bug House in the Garden.

I can’t say I felt comfortable about doing this, it felt as though I was tampering with nature but I convinced myself it was for the best. The way things turned out, it was just as well I had put the tubes somewhere safe.

Around Christmas time, the Bug House was knocked off the wall, probably by someone using it as a step to scale the wall out of hours. It was put back, only to be knocked off again, this time early in February. With the help of Susan Taylor and of David Martin, who in fact did all the drilling and screwing, the Bug House was put up again but this time at a place I judged to be safer, higher up and away from potential scrambling routes in and out of the Garden. The Bug House has survived two falls showing it is quite tough, but I am concerned about the effect on the bees in the wooden blocks where several mud seals have been lost (see photos below); time will tell if the bees have survived.

With the winter nearly over and warmer weather in prospect, it was time to put the removable tubes back in their rightful place. Although I don’t expect to see the bees hatch until April, all the advice is to get the tubes in place by early March so that they can acclimatise and warm up slowly with the weather. So, on March 6th I opened up the box and put most of the tubes back in the Bug House. I was careful to put them back in the correct orientation so that the males can make their way out first. I saved a small number to put in an experimental Bee Hotel that I’ll describe in another post.

With the tubes safely back in the Bug House I began to look around for potential bee forage. At present there are a few flowers in the Leechwell Garden, a little rosemary, some crocuses and several clumps of pulmonaria and I have seen honeybees enjoying the rosemary on sunny days. Also in one of the adjacent car parks there are some grassy banks populated with dandelions and celandines. The dandelions are very popular with honeybees. Also one of our neighbours has a striking deep pink, ornamental plum (Prunus mume beni-chidori ) which is currently in flower and when the sun shines there is a gentle, sweet fragrance and the bees flock to it; I have seen honeybees and one bumblebee.

It still feels quite early in the year and the weather seems stuck in a cool phase, but there is some forage about and on a sunny day the bees know how to find it. By the time the Osmia hatch out, which should be mid April, there will be plenty more forage about to keep all the bees happy.