As we humans continue our lives and perhaps savour the prospect of settled warm weather and holidays, the busy part of the year is already over for the solitary Red Mason Bee (Osmia bicornis). These important pollinators began their activity in early spring and have now built their nests and laid their eggs.

Last year I was fascinated to watch some of these bees in a Bug House in the local community garden (The Leechwell Garden). This year I kept a closer eye on this colony to try to understand their behaviour. I also built an Experimental Bee House at the bottom of my South Devon garden and watched the bees build nests. [I realise not everyone is interested in constructing new bee houses so I have described this in the next post.]

This week is Pollinator Awareness Week so it is especially important that we think about how to protect and encourage these pollinating insects.

The males emerge and misbehave

Both Bee houses contained mason bee nests (in removable tubes or in wooden blocks) constructed a year ago. The removable tube nests overwintered in my garden shed and were put out again on March 6; twenty four filled tubes and some empty ones went in the Leechwell Bug House and eight were put in the new Bee House. The wooden block nests stayed out all winter as they are an integral part of the Leechwell Bug House; they may have suffered damage when the Bug House was dislodged from the wall.

I watched the tubes carefully from mid March and was very pleased to get the first hint that a male had emerged when, on April 16th, I noticed that one of the mud seals had been broken. The day before had been very warm so perhaps that encouraged the bees. Over the next week, I began to see males flying about near the two Bee Houses. Fresh males are very beautiful: about two thirds the size of a honeybee and with long antennae, they have vivid orange abdominal hairs, a fringe of beige hair around the thorax and a very distinctive pale “moustache”. Some look a bit different: they have few abdominal hairs and look rather shiny.

The numbers gradually increased over the next two weeks and on sunny days there would be a cloud of male bees near the Leechwell Bug House (perhaps as many as 30) behaving in a very characteristic way. They would fly about, swinging from side to side rather like a metronome, sometimes stopping to look in to a tube, sometimes flying off to feed on nectar. They would also “bomb” one another, especially another male that had stopped to rest or to warm up. I saw one male try to pull another out of a tube and, once his friend was out, he tried, rather unhelpfully, to mate. The cloud of bees would work themselves in to a frenzy when it was very sunny or when a male/female mating pair was present, perhaps they could they smell other females.

All this activity would stop when the temperature fell to 11oC or lower. The males would retire to the tubes in the Bee House, sometimes two or more in one tube where they would look outwards waiting until the conditions improved. Other bees such as the Hairy Footed Flower Bee continued to forage at this temperature and the disparity may have something to do with size, the larger insect being able to tolerate the lower temperature.

Some females and some mating

I didn’t witness any females emerging from their nests but I knew that had happened when I saw mating pairs on April 28th and May 7th in the Leechwell Garden. This was an exciting moment as it was a first for me. I was amused to see the female in the first pair decide to go walkabout; the poor male had no option but to sit there even when dragged in to a hole smaller than comfortable for two bees. My excitement was tempered by noticing many mites on the first mating pair which I suspect is not good news for the bees. The latter mating pair did not have the mites as far as I could tell.

Males near the end 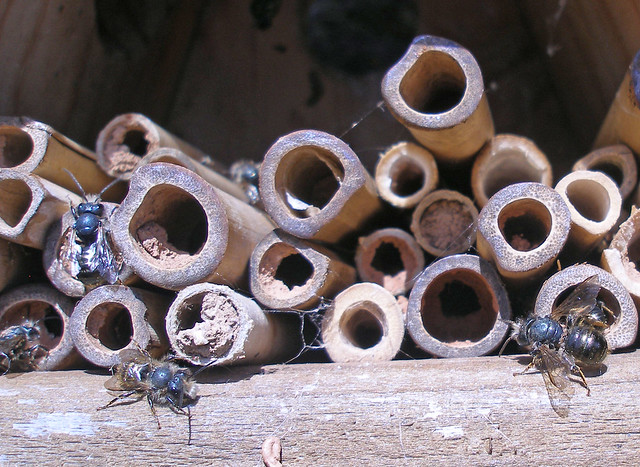 Some of the males continued to patrol the Bee houses up to a month after emerging, ever hopeful of finding a receptive female. By this time they were wizened and black and didn’t look like red mason bees any more apart from their white facial hairs. Perhaps we would also look sickly if we fed on sugar alone. They disappeared altogether by the end of May.

May 12th was another exciting day as I saw chrome yellow pollen on the floor of the Bee House at the bottom of my garden for the first time: I now knew that the females were busy building nests. The females are also distinctive and very beautiful, about the same size as a honeybee and larger than the male with, on their head, two horns which they use for tamping down mud. They lack the pale “moustache” but like the males, their abdomen is clothed in vivid orange hairs when freshly emerged.

I watched the females returning after foraging, buzzing loudly and entering tubes head first. After a short time they reverse out, turn round and back in to the tube. I am not sure what is happening here but I witnessed the behaviour many times. Once this elaborate manoeuvre was complete they flew off for more. I also saw one female building a mud partition. She added mud to the inner surface of the tube and gradually, over several trips to collect mud, built the partition inwards keeping it symmetrical and circular before sealing it off.

Throughout the season, there seemed to be plenty of forage about and no shortage of mud for nest building. For both Bee Houses I saw females continuing to fill tubes in to the third week of June.

In both locations, the number of females seemed very low, especially as there were plenty of males. Last year most of the tubes and wooden block holes in the Leechwell Bug House were reused by females who cleaned out the mess before re-provisioning them. This year the females did reuse old tubes but seemed to prefer fresh tubes when available. In the Leechwell Bug House I saw only two females but they filled more than twenty tubes. Males emerged from the wooden block nests but none of these was reused. At the bottom of my garden there were at least four females and they filled twenty four tubes. In both locations, the mud seal on some of the tubes remained intact and neither males nor females appeared.

I don’t know why this year has been less successful but I wonder if the tubes were tampered with at a critical time. I know that some were stolen last summer so I presume that, at that time, many of the tubes were disturbed. I also suspect that the tubes in the Leechwell Garden were tampered with again in March this year. Perhaps this double interference damaged the developing females. The Bug House also fell to the ground twice and perhaps the wooden block nests were damaged. Another possibility is that mated females were produced but decided to go elsewhere.

A third possible explanation would be that the old tubes had been infected with another organism that damaged the developing bees.

I opened up the wooden block nests to see if I could glean any information about these problems. None of these had been refilled this year, whereas last year they were all reused. The wooden blocks were very messy: I could see the individual cells made by the bees but there were no intact dead bees. The nests were filled with a brown dust although within this dust I could see dead larvae. It was also clear that in many cases the mud partitions between cells were still intact. There had clearly been a major problem with these nests and I suspect that they may have been infected. The bees avoided these nests so they seemed to know that something wasn’t right.

I am beginning to think that new tubes should be supplied each year to make life easier for the bees and to avoid build-up of contamination.

Now it’s important to leave this season’s nests so that the eggs can develop and grow in to larvae. I need to wait until late autumn before moving them.

Overview of the year

It’s been another fascinating season of Mason Bee watching and as before I have been enormously impressed by the hard work and ingenuity of these bees, especially the females. The males have only one purpose but they seem to do it well.

Watching these bees is not only a fascinating experience, it also makes you aware of the interconnectedness of the natural world. The bees depend on flowers and the flowers depend on bees. We mess with these relationships at our peril and perhaps we understand our own place in the world by realising this. The highlight of season for me was seeing the chrome yellow pollen for the first time. It signified that everything was working; females had mated and were visiting flowers to continue their species. Fresh yellow pollen has a colour like no other, it seems to glow with the energy of sunlight and signifies the unfolding spring.