As I drove back from Paignton, the low sun cast long shadows across the sensuous folds of the South Hams hills. But the sunshine was deceptive; the temperature outside was 7oC and in the distance, there stood Dartmoor sprinkled liberally with snow like icing sugar on a cake. It was our first taste of winter and, inspired by Mark Cocker’s recent Guardian Country Diary on “The meaning of a bumblebee”, I had been to Roundham Head in Paignton to see what insects were about on this cold day.

There were pockets of warmth in sheltered corners of the Roundham Head Gardens but generally it felt cold in the wind and by the time I got back to the car my hands were numb. Despite the conditions, there were plenty of flowers about: yellow scorpion vetch in profusion, hanging curtains of rosemary with a few grey-blue flowers, exotic pink and white grevillea, purple spikes of hebe and the pink cup-shaped flowers of bergenia.

What about the insects? I saw a few large black flies and one hopeful hoverfly but my biggest surprise was two smart looking painted lady butterflies enjoying the sunshine. Seeing bumblebees required patience but eventually I was rewarded by the appearance of a few buff-tailed bumblebee workers filling their pollen baskets by probing the rosemary, grevillea and bergenia. I also saw one plump and furry buff-tailed queen meticulously working the bergenia flowers before she flew off.

Mark Cocker attributes his surprise sighting of a bumblebee in Norfolk on January 1st to anthropogenic global warming and anomalous weather linked to El Nino but there must also be suitable forage for the bumblebees if they are to be active in winter and survive. The British penchant for gardening and for planting winter-flowering shrubs seems to supply this forage.

Last Sunday, we enjoyed a walk around the small Devon seaside town of Salcombe. It’s a pleasant place now that the season is over and we relished the views over the estuary on this cooler but dry day. I don’t know whether I am looking more carefully or perhaps I haven’t previously visited Salcombe at this time of year? I didn’t remember the profusion of flowering ivy.

A narrow coast road links the town to its two beaches, North Sands and South Sands. On one side of this road there are low cliffs dropping to the sea and all along the cliff tops were huge banks of ivy. Given my recent experience, I now search any stand of flowering ivy for Ivy Bees and the Salcombe cliffs did not disappoint. 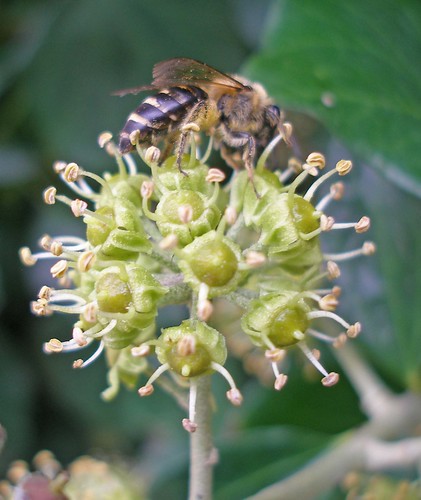 Wasps were the predominant insect on the ivy flowers but there were also quite a few of the sleek, slender, yellow and black-banded Ivy Bees (Colletes hederae) with their characteristic russet hairs. The wasps mostly tolerated their company although I did see one attack an Ivy Bee. The bee fell away but I could not be sure if it died or just sloped off. 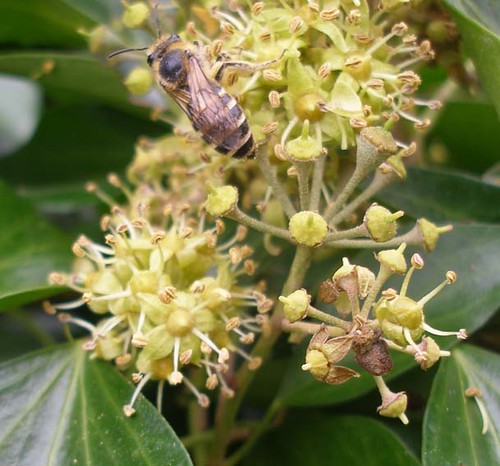 The Ivy Bees at this site seemed to be moving about less than when I had seen them before. Once they had found a suitable flower head they spent some time exhaustively probing its flowers. Perhaps there was more pollen and nectar available? Perhaps it was cooler? I looked for colonies but did not locate any; I presume the nests are in nearby cliffs but as these are mostly private land they are out of bounds to Ivy Bee-nerds like me. 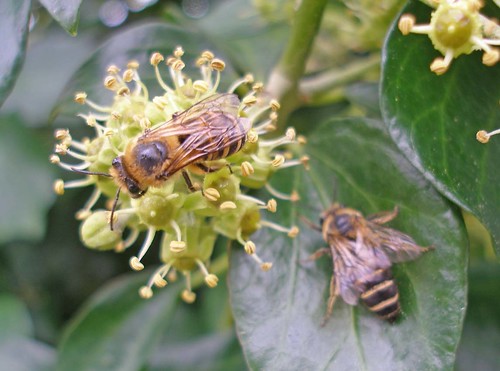 What I am beginning to realise is that, in this part of Devon, Colletes hederae is doing rather well with large colonies and large numbers. They also don’t seem to mind the cooler damper weather we have been experiencing.

It’s good to have a positive bee story to tell.

For those interested in Ivy Bees, they featured in the Guardian Country Diary this week