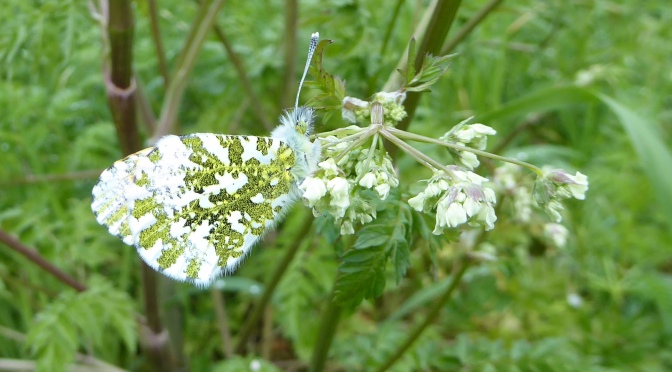 It was still early when I looked out of the back window.   I had expected a clear morning but, instead, a veil of grey mist lay across the eastern hills.  The line of mist seemed to follow the course of the river Dart hidden beneath the lower town, softening and lending an air of mystery to the view.     A hazy orange glow emerged above the line of mist gradually shading into a clear, translucent blue sky.  This orange dawn light reminded me of one of the species of the butterfly about at this time of year.  The French call these butterflies “l’aurore”, (the dawn) and the Germans refer to them as “Aurorafalter”, (the dawn butterfly).  We English settle for the name “orange-tip butterfly” (from the bright orange wing tips of the male).

Last year, during the first lockdown I found orange-tip butterflies (Anthocharis cardamines) in the Nursery Car Park, one of the town centre car parks.  The butterflies laid eggs on the garlic mustard growing along one of the borders, caterpillars developed and I presume they left chrysalises on vegetation in the car park.  Unfortunately, last December, the council carried out a “tidiness” raid on the Nursery Car Park cutting down most of the trees and all the plants and other vegetation, presumably destroying the chrysalises.  Some early spring flowers did grow but in the third week of April the “tidiness brigade” returned and strimmed the borders again.  This included destroying a bank of flowering three-cornered garlic that was popular with female hairy-footed flower bees last year.  I don’t bother to look in the Nursery Car Park now.

The male orange-tip butterfly is one of the clear signs that the new season has arrived and, at this time of year, they can be seen meandering about the countryside searching for females.  In flight, they mostly appear white making them awkward to distinguish from other “white” butterflies although hints of the orange wing tips can sometimes be seen.  This year, I had seen several of the males in different places around the town despite the markedly cool weather.  I had only seen one female so, last Sunday afternoon, with sunshine forecast, I decided to have another attempt at finding orange-tip females, this time in an orchard on the western side of Totnes.

Colwell Wood is owned by the Woodland Trust and located a short distance up Harper’s Hill.  It occupies a sloping site with good views towards Dartmoor and was planted nearly 25 years ago.  Now there is an area of woodland with a good selection of broadleaf native trees and an orchard stocked with heritage fruit trees: apple, plum, pear, cherry, medlar and mulberry.

A mature horse chestnut tree greeted me when I walked through the wooden gate off Harper’s Hill into Colwell Wood.   The tree was covered in floppy lime-green leaves and there were plenty of white candle-like flowers flecked with pink.  The woodland area is a short distance away and, with the trees now fairly mature, this a lovely spot.  A path took me through the rows of mature trunks, sunlight percolated through the partially leafed trees and above me a chiff chaff sang among branches that chattered as the breeze made them tremble.  The lesser celandine that had given the woodland floor a yellow sheen a few weeks ago were on their way out, the colour being replaced by a fulsome green growth with ferns unfurling and hogweed leaves spreading.

The woodland ended and I walked a little way down the slope into the orchard, now a mass of flowers with most of the trees in blossom.  Apple predominated with its pink and white flowers and a steady stream of pollinators were visiting.  I saw bumblebees, honeybees and hoverflies and above the trees a few St Mark’s flies.

I also began to see an intermittent passage of white butterflies across the orchard in the sunshine.  With their undulating, slightly uncertain flight these insects often remind me of fragments of paper blowing in the wind but here a better comparison would be with the pale petals of apple trees.  These were blowing about in the breeze and on more than one occasion I jumped thinking that a butterfly had passed me only to find it was just a fragment of apple blossom.

Several species of butterfly appear white in flight, so it’s important to look carefully at individual characteristics to identify the species. Most of the “white” butterflies passing through the orchard that afternoon, though, were elusive and accelerated away when they saw me. Then two appeared dancing around one another in the air.  I watched, thinking this might have been a mating pair but one flew off leaving the other to land on some cow parsley.  I got a quick glimpse of orange as the butterfly landed so I knew this was a male orange-tip.  He tolerated me approaching and looking, even when I knelt down and inadvertently sat on a stinging nettle.  His wings were closed for most of the time, revealing the beautiful green and yellow mottled underwing patterns (see picture at the top of this post and also below).  Slight traces of orange bled into the pattern but the dominant mottling blended well with the colours of the cow parsley.  When he had finished feeding, he flew off giving me another quick flash of brash colour.

Then another “white” butterfly appeared and landed on one of the pear trees.  This insect fed with wings half open, also exhibiting the mottled underwing pattern characteristic of orange-tip butterflies.   It lacked the orange upper wing markings but in their place were black wing tips and spots showing this to be a female of the species.  I was able to watch for a while before she flew off.

My third close encounter with a “white” butterfly that afternoon occurred as one landed on apple blossom and rested with its wings closed.  The underwings of this individual were mostly yellowish green with a beautiful pattern of darker, radiating veins rather like the branches of a tree.  This was a green-veined white butterfly (Pieris napi).

The weather changed, cloud covered the sun and the temperature fell a little.  The butterflies took this as a signal and I saw no more that afternoon but I returned a few days later on a sunny but rather windy day.  Walking through the woodland section, I came across several clumps of garlic mustard, the larval food plant of the orange-tip butterfly (and also the green-veined white).  I examined each plant carefully and very gently and was pleased to find one tiny, orange, ovoid structure attached just under the flower head on one flower stem (see pictures below).  This “mini rugby ball” was the egg of an orange-tip butterfly.  It has a much better chance of producing a new butterfly next year in this environment compared to those I saw last year in the Nursery Car Park.

Thanks to Dr Claudia Garrido who identified the medlar tree for me (see picture below).