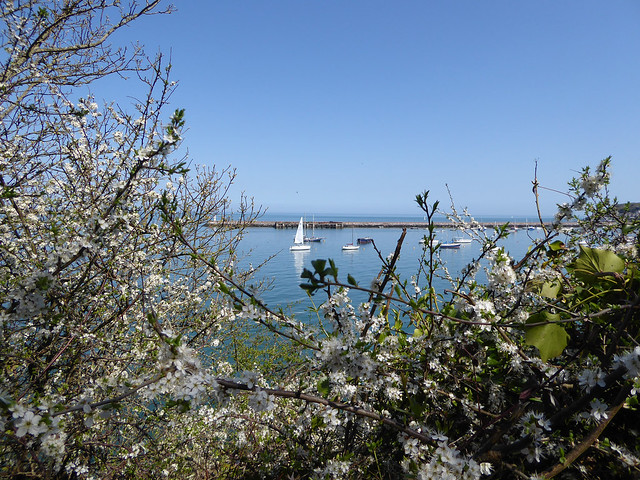 After so many cool, damp and grey days, spring arrived in a rush in the third week of April. Temperatures soared by nearly ten degrees and the sun shone strongly from a virtually cloud-free sky, filling the air with an unexpected brightness, at least for a few days. The sudden change in the weather demanded that I get outside so I drove the short distance to the fishing port of Brixham, parking on the clifftop road on the eastern edge of the town. A steep stone stairway took me down the hillside past curious, deserted, rectangular buildings and wide sweeps of concrete enclosed by thick scrub echoing with birdsong. These are remnants of the Brixham Battery, built in 1940 to guard Torbay against a German invasion, now Grade 2 listed and an informal, unplanned nature reserve. Dandelions and cowslips were dotted about grassy areas and fleshy-leaved green alkanet with its grey-blue flowers provided a contrasting colour. The stairway continued downwards among trees until I was just above the sea where I joined the coast path.

This section of the coast path is enclosed by low scrub and, at this time of year, blackthorn dominates, its branches covered with a snow of small flowers, creating a curtain of white with occasional glimpses of the blue sea. In the bright sunshine, the delicate white petals were almost transparent below a confused mass of yellow-tipped stamens. Eventually, this enclosed path gave on to an open, grassy area roughly the size of a football pitch, overlooking the water of Torbay and backed by thick trees creating a sense of seclusion. Wooden benches positioned along the sea side were popular, occupied by people wearing sun hats and enjoying the spectacular view.  The full panorama of Torbay was spread out ahead like an enticing display in a travel brochure: the red cliffs, the white seafront buildings, the pine trees, the big wheel and, in the foreground, the Brixham breakwater with its white lighthouse. The sea was a bright, slightly greenish blue textured with patches of silvery sheen  and pleasure boats shuttled across the water to and from Torquay.  It was a holiday scene and felt almost Mediterranean.

Amongst all this human activity, no one seemed to be paying any attention to the many mini-volcanoes of crumbly soil partly concealed beneath the rough grass or to the many bees moving about the area just above the grass. Everywhere I looked there were bees flying about, backwards and forwards, swinging from side to side, as if they were trying to find something; a few were walking about on the red soil. There must have been thousands of bees, an amazing natural phenomenon and very exciting to watch. When I looked carefully, I saw that they were mostly black but with distinctive bands of pale hair. These are Ashy Mining Bees (Andrena cineraria), one of our more common solitary bees, and the soil volcanoes in the ground are their nests.

While I was taking in the scene, a couple arrived, both carrying plastic bags. He was in his sixties with long white hair roughly corralled into a pony tail. She was in her late fifties with copious dark hair. They threw down a blanket into the middle of the grassy area, stripped down to their underwear, cracked open some cans and proceeded to sunbathe. Like the other people, they didn’t notice the bees swirling about the grass around them and I wondered how they might react if they encountered the insects. Luckily for them, only the females of these kinds of mining bees possess a sting and they use it only when threatened.

I wanted to take some photos of the bees but, wishing to avoid any misunderstandings as I waved my camera about, I moved to the other end of the grassy area, passing a small turf-roofed building that used to contain the searchlight for the wartime Battery. I found an unoccupied bench, sat down, and providing I was still, the bees resumed their incessant movement around me. The bench turned out to be a front-row seat as, on several occasions, I saw one bee rush at another and the two struggled for a while on the ground. Two or three others tried to join in and it all got a bit confused and messy for a while. Eventually, however, only two were left coupled together, end to end. They stayed like this for a few minutes before separating and flying off. I presumed they were mating but it seemed rather sedate compared to the frantic copulatory behaviour of some solitary bees.

Photographing the flying bees is difficult, but for the short time they were occupied in mating they were relatively still, making it easier. My photographs showed that the honeybee-sized females have shiny black abdomens with a blue sheen in some lights. Two thick, furry bands of grey-white hair line the front and back of the thorax and the face is white-haired with black antennae. The slimmer and smaller males also have black abdomens but differ from the females in having white hairs on the sides of the thorax and thick tufts of white hair on the face. With their pale hairs and contrasting dark abdomens, Ashy Mining Bees are one of the most distinctive and beautiful species of mining bee in the UK.

Despite all this excitement on the ground, I kept an occasional watch on the sea and got quite excited when I saw a shiny black head emerge from the water. This was one of the local colony of grey seals swimming towards Fishcombe Cove. The water was so clear and calm that the seal’s huge body was clearly visible as it passed.

When I had finished, I walked back past the lush banks of three cornered leek that grow along the low cliff edge. I saw male Ashy Mining bees nectaring from the delicate white-belled flowers. Further on, I stopped to look at the blackthorn flowers. Here there were more Ashy Mining Bees foraging together with one very different bee with a shock of orange-brown hair on the thorax and a largely black abdomen tipped with orange-red hair. I later identified this as an Orange-tailed Mining Bee (Andrena haemorrhoa). With all this insect interest, there should be a good crop of sloes on the blackthorn here in the autumn.

If you are interested to learn more about these wonderful bees, here are three more descriptions: