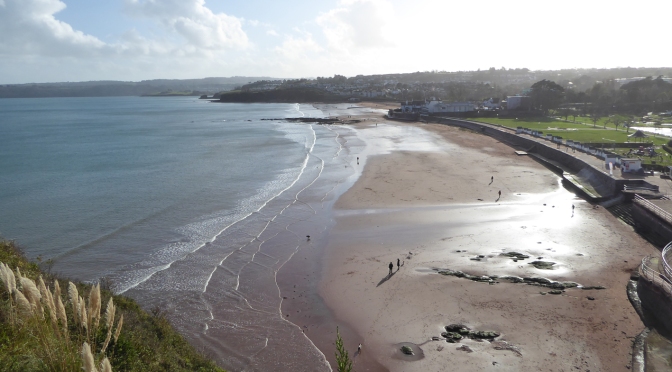 By the end of October, I had begun to feel that autumn was running away from me.   Then came the announcement that a second lockdown would be imposed.  So, one afternoon at the beginning of November, I decided I needed to get outside and went to Roundham Head in Paignton, one of my favourite nearby nature haunts.  Roundham Head sits roughly in the centre of the semi-circular arc of Torbay and from the southern side of the promontory there are fine long views around to Brixham with its harbour, small boats and breakwater.

My main reason for visiting, though, was the public garden built on the southern slopes of the headland.  Here, zig zag paths meander up and down between borders stocked with tender and unusual plants many originating in warmer climates but thriving here in the mild maritime conditions of Torbay.  Many of these plants continue to flower here in autumn and winter.

I started at the top of the public garden looking south west with the low sun creating a dazzling mirror across the wet, low-tide sand at Goodrington where dogs and their owners rushed back and forth.  There was rain about, though, and across the bay Brixham was veiled in a grey mist, its landmark lighthouse barely visible.  Fortunately for my afternoon, the storm gradually moved away, and the cloud over Paignton evaporated leaving blue sky and sunshine but with a strong blustery wind.

I wandered about the gardens where the low sun was casting long shadows from the trees and shrubs, draining them of colour, leaving dark silhouettes.   The agapanthus had lost their blue flowers, replacing them with mop heads of chunky green seed capsules, like so many large lozenges.  A fuchsia hedge, covered in blossom last time I visited was now nearly devoid of flowers but, in compensation, yellowish-brown clumps of fungi grew beneath.  Some plants were still in bloom, though, and I was surprised to find several large clusters of creamy coloured lantern-shaped flowers with pinkish sepals, hanging like ornate chandeliers above thick clumps of spiky strap-shaped leaves.  These are yucca gloriosa, plants originating in the southern US although they seem to be very happy here.

Spread about the upper, sunnier parts of the garden, I also found several large banks of rosemary.  The plant grows prolifically here, covering long stretches of wall where it hangs like a pale blue curtain.  It begins to flower in late summer and continues through the winter providing important forage for insects; many of its locations here are also sheltered from the wind.   Despite recent heavy rain, the rosemary was covered in small, spiky, silvery-blue flowers and this is where I began to see pollinators.   A hoverfly, probably Eristalis tenax, the world’s most widespread hoverfly, was feeding and I managed a few photos despite its jumpiness.  Then I saw the first of several small bumblebees each with a furry, pale chestnut thorax and stripy abdomen.  They were nectaring from the rosemary, moving purposefully from flower to flower, taking away a dusting of pollen from the overarching stamens as they fed.  These were common carder bees (Bombus pascuorum) and as well as feeding they occasionally basked on the stones of the wall in the sunshine.  Sometimes, two or more were present on the same patch of rosemary and there was a little joshing between the insects.

I took as many photos as the carder bees would allow in the hope of being able to see their back legs as these are a key to establishing the gender. Where I was able to see the back legs, the insects were all males and Steven Falk kindly helped confirm my identification. These males must be late survivors from the second brood. The mated females will have settled down to hibernate and the males are left to live out their short lives.

I did see one smallish buff-tailed bumblebee (Bombus terrestris) collecting pollen, a worker which most likely comes from one of the winter active colonies that live in these gardens.  I was surprised to see so few but perhaps the weather had put them off or there were other flowers available in the many nearby private gardens.   The surviving male common carder bees have no nest to return to for shelter which may be why they were still foraging in this threateningly damp weather.

By now, another storm had bubbled up from the south west but this time it was closer and a fine grey haze hung over the beach and countryside at Broadsands just along from Goodrington.   The blustery wind chased the autumn leaves about and hurled a few large drops of rain at me, stinging my face.  The sea took on a sinister greenish blue tone and a kestrel appeared, hovering in the wind above the gardens, eventually landing on the steep cliff face.   I decided to get back to the car before the rain set in properly.

6 thoughts on “Seaside Storms and bumblebees” 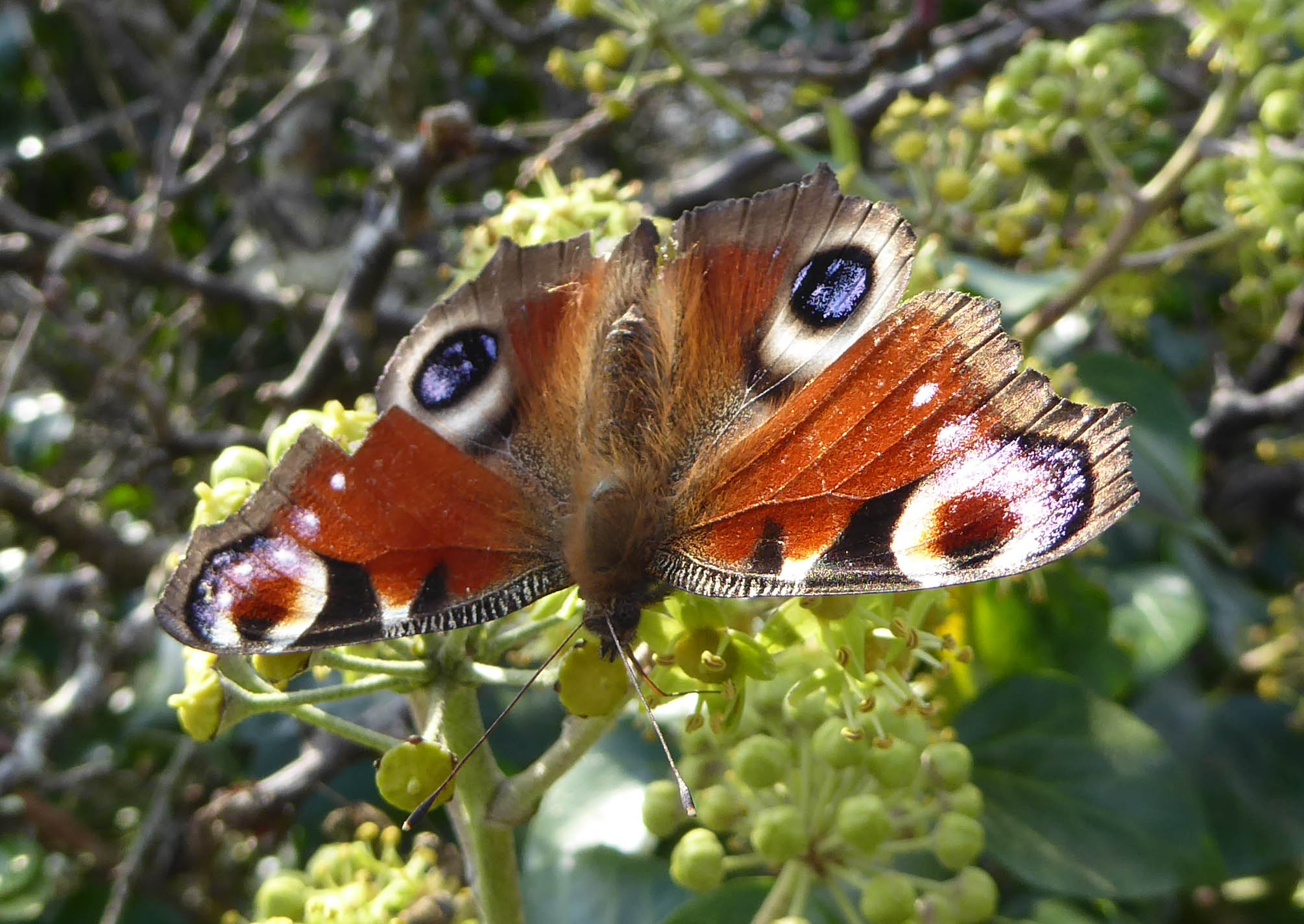