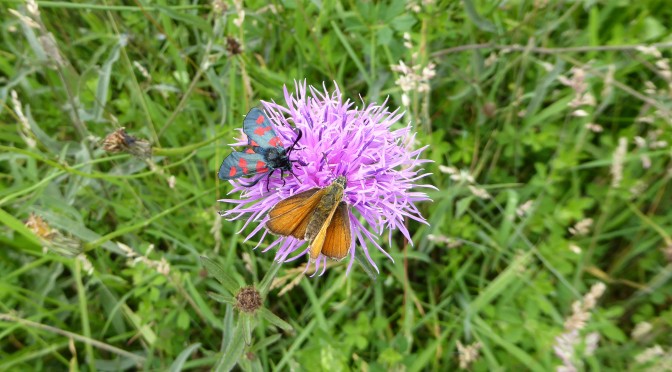 Flower-rich hay meadows were once a major feature of our countryside but from the mid-20th century onwards a tidal wave of agricultural intensification swept across farmland taking away 97% of the hay meadows along with the colourful flowers that once grew there.  Together with increased use of chemicals and pesticides, the effect on wildlife has been devastating with farmland birds such as the linnet and the yellowhammer declining by more than 50% since the 1970s.  It was a pleasant surprise, therefore, when Hazel recently returned from one of her solo walks to tell me she had discovered a flowery meadow on the outskirts of the town with many interesting insects.  So, for my ninth Lockdown Nature Walk I want to take you to this hidden, rather magical place. (For my previous Lockdown Nature Walks, click here).

Our starting point is Harper’s Hill, the old road to Plymouth and the West (see Lockdown Nature Walk 7), that heads steeply upwards away from the town and the main Kingsbridge road.  The walk I shall describe was done on an overcast morning in mid-July.

After crossing the busy Kingsbridge road, we trudged slowly up the steep hill, soon entering the tree-enclosed part of the track that felt dark, damp and cool that morning.  As we passed a small open area on the right of the track, though, the sun broke through the cloud for a short time, illuminating a large patch of brambles.  Many small brown butterflies flitted about the flowers in the warm sunshine together with bumblebees and one beautiful demoiselle.

In time, the lane levelled out and along the damp, shaded banks on the left were several patches of an unusual plant with large elongated heart-shaped leaves and bright red candle-shaped flowers.  This is red bistort, probably a garden escapee as my wildflower books don’t consider it suitable to include.  Several black and yellow wasps were nectaring from the flowers that morning.

At Tristford Cross, we turned right along the old road above Windmill Down.  As befits a ridgeway road, there were fine views across countryside towards Dartmoor, and this part of the walk felt bright, breezy and fresh, a perfect antidote to the gloomy national news.  Although the verges were dominated by thuggish swathes of nettles, there were plenty of other flowers.  Common red soldier beetles, popularly referred to as hogweed bonking beetles, were performing on the white, tea plate-sized flowers of their favoured plant whilst honeybees wallowed in frothy, creamy clumps of meadowsweet.

We soon reached a clutch of caravans and outbuildings by the roadside, marking the start of a stony track descending downhill, away from the ridgeway road.  The man who lives here keeps chickens and cultivates vegetables and below his neat and tidy settlement there was a large stand of brambles with several white butterflies feeding.

This stony track is a continuation of Jackman’s Lane (another section was featured in Lockdown Nature Walk 7), a typical green lane with woodland on the left and high Devon hedges on the right.  When I walked here about two weeks previously, the hogweed had just come into flower attracting many black and yellow long-horned beetles.  Since then the vegetation had increased making the lane feel more enclosed.  The hogweed was also past its best but wasps, hoverflies and more soldier beetles were enjoying what remained of the flowers.

Despite the increased vegetation and the variable cloud cover, plenty of light reached the lane but this changed when tall trees began to enclose the track.  Some way into this darker section we passed an enclosed compound on the right-hand side of the lane, surrounded by sturdy metal fences; this is the Permaculture Centre based around an old concrete water reservoir.

Hazel carried on down Jackman’s Lane for a longer walk while I located a makeshift path through the line of trees away from the lane, just beyond the Permaculture Centre.  This path is like a portal between two worlds and it transported me from a mostly monochrome green lane into an open grassy meadow set on a steeply sloping hillside and full of colourful flowers and insects.   A bench has been installed at the top of the hill so that people can sit and enjoy the meadow and the views across the town of Totnes and to the hills of Dartmoor.  Follaton Oak, a recent housing development,  lies at the bottom of the meadow.

I walked slowly downhill, passing a copious clump of brambles where a few bumblebees were feeding from the pinkish flowers.  At first, yellow was the dominant flower colour in the meadow with large amounts of bird’s foot trefoil growing across most of the area.  Although bird’s foot trefoil grows widely in the UK, I don’t remember having seen so much of the plant growing in one place. There were also some yellow heads of a dandelion-family flower bobbing in the breeze (cat’s ear or hawkbit perhaps); a few clumps of thick rushy grass suggested underlying dampness.  Purple began to compete with yellow further down the slope where large stands of thistle and knapweed flourished.  White clover dominated some areas.

Now and then, the sun broke through the cloud and the mosaic of meadow flowers sparkled in the bright sunlight as though many small, coloured lights had suddenly been switched on. With all these flowers, I expected to find many insects and I wasn’t disappointed.  Red-tailed bumblebees fed from the knapweed and thistles, and crickets and grasshoppers scattered in sudden leaps to avoid me as I walked. The stars of the insect show were, however, the distinctive black and red burnet moths (Zygaena).   These medium-sized, day-flying moths have a wingspan of about 3cm and are unmistakeable.  With their shiny black forewings decorated with red spots, they look as though they have put on smart black jackets with bright red buttons.   Their black, club-shaped antennae are another notable feature. (See pictures at the end of this post)

I came across the burnet moths all over the site, often when they were feeding on knapweed or thistles and occasionally on bird’s foot trefoil.  From my photos and counting the spots on their forewings, they seem to be a mixture of five-spot and six-spot burnets.  When they find a good flower to feed from, they stay there for some time but I did see a few flying about the site.  They fly slowly, almost hovering, exposing their black abdomen and bright red hind wings.  The selection of flowers here is ideal for these moths: bird’s foot trefoil is the preferred food plant of the caterpillar and knapweed and thistles are liked by the adults for nectaring.

The burnet moths were not having it all to themselves, though, as there were butterflies enjoying the meadow as well. A tortoiseshell and a ringlet were flying and on two occasions an orange-brown small skipper butterfly and a burnet moth quietly coexisted on the same knapweed flower head (see picture at the top of this post).

This is an extensive area of meadow grassland on this hillside above the recent Follaton Oak housing development and I was intrigued to know how it came to be here. The original proposal for the development shows pictures of the area as rough pasture before it was developed but indicates that it should become “ecological grassland”, as it clearly has. The proposal also suggests the planting of fruit trees on the site and there are several apple trees now bearing fruit.

I wanted to know how the site was maintained so I spoke to Carol Owen of the Follaton Oak Residents Group.  She told me that the meadow is being left to be as wild as possible, mowed and cleared just twice each year.  Docks are becoming rather too prevalent so the residents try to cut these where possible. For the most part, though, no additional seeding had taken place so the many flowers we see now are those that have grown naturally.  Insects have colonised the area showing how easy it can be to achieve a form of rewilding.  The result is this wonderful natural area on the edge of the town.

From the meadow, there is a precipitous stony path descending between the houses with some good stands of ragwort growing nearby.  Go straight ahead from here to access a path leading to the Follaton Arboretum or walk along the roads between the houses to reach the Plymouth Road for a return to the town centre.