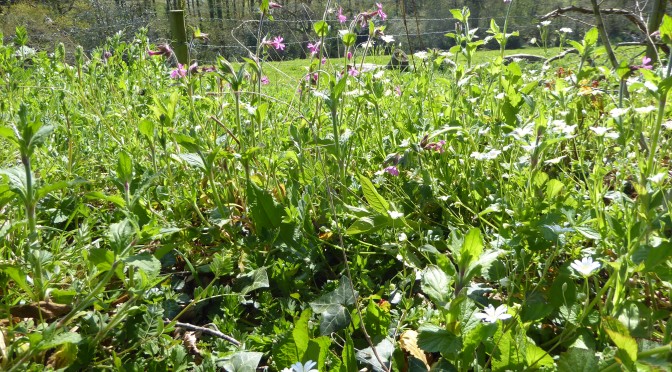 For the fourth of my Lockdown Nature Walks, I want to take you along Copland Lane, one of the many old tracks that radiate like compass points from the town of Totnes.    Copland Lane follows the westward compass point, roughly parallel to the busy railway line to Plymouth and Cornwall which lies some distance below in the valley.  It takes me about 15 minutes, on foot, to reach the beginning of Copland Lane which lies between the gate to a popular group of allotments and a moderate sized, newish housing estate.  I walked Copland Lane about a fortnight ago on a day of clear blue skies and warm sunshine tempered by a blustery cold wind.

A large stand of blackthorn, still covered in its small white flowers, grows near the start of the lane as if to herald the transition out of the semi-urban into a different world, a world of green, a world of growth, a world of colourful wildflowers.

At first, the lane drops gently downwards, bordered on the right-hand side by steep banks below the gardens of houses and on the other side by a bank of tightly packed soil perhaps stabilised by rubble, known locally as a Devon Hedge.  Various kinds of vegetation including shrubs and coppiced trees, grow up prolifically from both sides not quite meeting above the lane but creating an enclosed, sheltered feeling.  Sunlight percolates through the tree screen casting a dappled pattern across the track, but there is more to the light today.  At this time of year, the trees have fresh, pale green, almost transparent leaves and as the sunlight filters between and through the leaves it acquires a subtle greenness that I only experience in spring.

Along the right-hand side of the lane, where sun warms the soil, I notice large stretches of yellow archangel with its many pale yellow flowers each with hooded, fringed upper lip and broader, three-lobed lower lip with intricate pale brown markings.  Looking at the spear-shaped leaves, I see no silvery markings so this is likely to be the true native species rather than the garden cultivar.  A worker early bumblebee with its pink-tipped abdomen feeds from the flowers.

The left-hand side of the lane sees less direct sunlight but growth seems just as prolific although the species that prosper are different.  Banks of ramsons line the base of the Devon Hedge, starry white flowers just beginning to show.  Several pale spathes of Lords and Ladies struggle through the thick ivy that covers the side of the bank.  Fronds of hart’s tongue fern unfurl in groups as they push upwards and where the low sunshine catches their leaves, they become semi-transparent as if X-rayed.   Navelwort (wall pennywort) grows in places covering sides of the lane with its circular, fleshy green leaves with their central dimple or navel.  Its immature flower spikes push upwards getting ready to display many small white lantern flowers in a few weeks.

As I walk on, the lane changes, casting off its enclosed feel to become more open. The Devon Hedge loses its tree cover allowing the sun full access to the soil bank and the fertile conditions encourage the growth of a dense, tangled, green mass of plants (see picture at the head of this post and above).  Without flowers, I can’t recognise many of these but I do see the fleshy stems and crimson flowers of red campion and the starry white flowers of stitchwort.  I notice vetch-type leaves scrambling through the mass of greenery and one bright pink and white, pea-type flower reveals that this is common vetch.  The low sunshine cuts across the bank and through the mass of greenery, highlighting the dense luxurious growth.  Something about the light changes as it filters through the seemingly unfettered tangle of vegetation.  It’s difficult to pin the effect down but there is a softening, a dispersion.

Occasionally, I encounter people walking along the lane towards me and we perform an elaborate dance to maintain social distancing which often involves one party sheltering in a hedge.  Everyone is very polite and we usually say Hello but it feels so alien to shun others where we might normally have exchanged experiences, if only of the weather.

Now, gradually, the feel of the lane changes again.  It becomes wider and bound by neat hedges and farmland on the left.  There are cows in the fields and the lane takes on the persona of a farm track.  The houses on the right eventually peter out, also giving way to farmland, but before they do, there are large grassy banks bathed in sunshine and scattered, confetti-like, with stitchwort.  I also notice the violet-blue, funnel-shaped flowers and fleshy scalloped leaves, dark green but tinged red, of ground ivy showing well.   Some wild strawberry flowers promise fruit to come and one or two spikes of cuckoo flower push through the grass displaying their delicate lilac flowers.

As I stand gazing at the flowers, a man emerges on to the lane through a gate from one of the houses with his wheelbarrow.  He looks at me quizzically as I peer at the grassy bank and asks, not aggressively, what I am looking at.

“I’m looking at the flowers and the insects” I answer

“Ah yes, the flowers are much better now they clear the brambles” he replies before moving off.

The lane now has a short section where tall trees create a green corridor with much less sunlight.  The vegetation changes accordingly and the path edges are again lined densely with ramsons and, on the right-hand side, where a little sunlight filters through, more yellow archangel seems to prosper.  Not long after the tree cover ends, the open, hedged lane splits, offering a choice of two tracks.  One is Higher Copland Lane which leads to the hamlet of Copland where someone with a sense of culture and a sense of humour has set up a Bed and Breakfast called Appalachian Spring.  I take the other track, Lower Copland Lane, which provides me with the easier way to return to the town, but before I do, I look at the large clump of Alexanders that has colonised the junction of tracks.  It stands in full sunshine today with its creamy mop head flowers above thick fleshy stems reminding me of scoops of Cornish Dairy Ice Cream enjoyed as a child on holiday.  Alexanders grows mainly by the coast so it is a surprise to find it here.  The flowers are proving very popular with hoverflies and almost every flower head is occupied by one of these insects.

Copland Lane itself is about a mile long, whether you take the Higher or Lower branch.  It contains a variety of different environments and there are many interesting things to see.  Today it also provided me with a much-needed distraction from the unusual and unsettling way of life now imposed upon us.