Last week, on a clear, warmish evening, we went up to Haytor on the south eastern corner of Dartmoor to watch the sunset.  Haytor consists of two huge outcrops of granite, one larger, one smaller, set on a hill some 450 metres above sea level. The two huge outcrops of granite are a local landmark visible for miles around, and the position of the Tor affords panoramic views across the surrounding countryside.

A wide, grassy track led steeply up to Haytor from the car park. The sun was setting directly behind the great granite outcrop that evening so the path and the surrounding countryside were in shadow, bathed in an eerie twilight.  Stands of yellow gorse and vivid purple bell heather lined the path and a few crows pottered about on the track ahead of us.  The rock itself was a flat grey in this light but, behind it, the sky was a luminous pale blue engraved with contrails left by passing aircraft, brilliant white shooting stars.  Turning to look back, there were long but slightly hazy views across rolling countryside to Newton Abbot and on to the sea more than 10 miles away at Teignmouth.  Much of this land was still illuminated by the sun and we could see woodland, small towns and the white scars of clay mine workings.  Increasingly, however, a portion of the land lay in shadow as the sun set.

Under the eastern flank of the larger rock, shadow dominated and the air was cool but upon reaching the western side it was as though we had entered a different, more optimistic world – a world of orange light, brightness and warmth.  The sun was still some distance above the horizon but its low rays created a curious moonscape on the nearby moorland.  Every tussock of grass and every craggy stone were illuminated along with the occasional sheep; every object cast a long shadow.  The rich light lent a warm glow to the grey Haytor stone probing every crack, crevice and fissure.  Two German children and later, several local lads in reverse baseball caps clambered in to an alcove in the rock to enjoy the view.  One or two small birds tracked across the landscape together with a lone bee returning to its burrow. In the distance the western hills acquired an apricot halo.

As the earth turned, the sun continued to approach the horizon but for some time, corresponding changes in the landscape were slow.  Looking back to the east, increasing amounts of land were enclosed in shadow, and, around the Tor, shadows lengthened.  The colour of the rock changed slowly from a warm pale brown at 20.00 to a deep reddish brown over the next twenty minutes.

Then events seemed to accelerate and I detected a change in the light level as if someone were turning down a dimmer switch.  I suppose the sun had begun to dip below the horizon but it was difficult to be sure as it was still too bright to look.  Shadows became longer still and the rock took on a pinker almost red hue, not unlike the colour of the stone used in some of south Devon’s older buildings.  For a few minutes, the sun painted the landscape surrounding the rock in the surreal colours of pink and a luminous green.

The colour of the rock continued to change and by 20.25, with the sun about half way below the horizon, (based on a photograph), the colour lost its warmth as if it were being drained away.  By 20.26, grey started to insinuate and a minute later the sun had disappeared.  The rock was now a uniform grey and the sun had set.

All that was left on the western horizon was an orange glow above the hills, a memory of the sun, with increasing apricot fringes either side.  Overflying aircraft and their contrails were now tinged with pink and, above all this colour, the sky was a very washed out, pale blue. 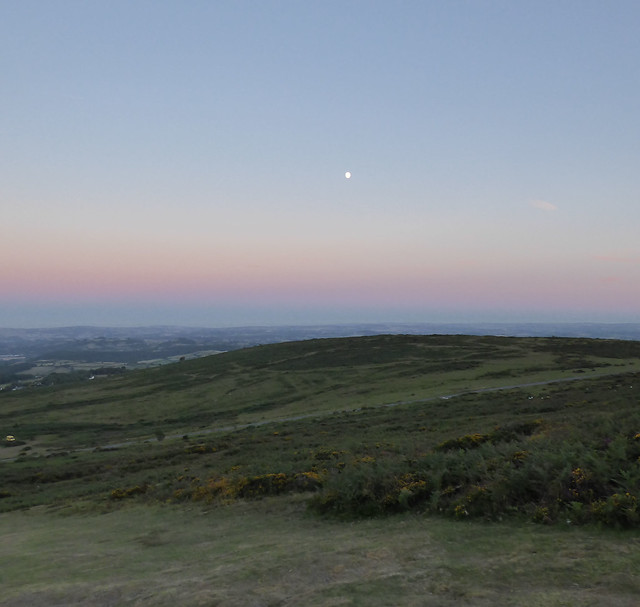 We walked back to the car in the half light, the air cooler now.  Ahead of us and in the distance, the eastern hills were bathed in a hazy dark blue light that extended above the land for a short distance.  Above this blue layer was a distinctive red layer that shaded to orange and yellow before merging with the clear blue sky above.

A white moon, almost full but not quite, now hung in the sky like a ghostly eye.

I’ve seen many impressive sunsets but I don’t recall ever being able to follow the changes so clearly.   What we witnessed that evening was a spectacular natural phenomenon, a celestial light show.

But can we understand how all these colours arise?  The explanation comes from considering the position of the sun at different times of the day and the effect of the earth’s atmosphere on the sun’s light.

Although the light coming from the sun is white, we know from looking at rainbows that it is in fact composed of light of different colours (red, orange, yellow, green, blue, indigo, violet).  These colours of light have different physical properties that mean that they respond differentially when they meet particles in the atmosphere.

For much of the day, the sun is roughly overhead and as its light travels through the earth’s atmosphere it encounters molecules in the air (nitrogen and oxygen mainly) and some of the light is scattered during this encounter.  The blue light, and the violet, are scattered more than the other colours and our eyes preferentially detect this scattered blue light; this gives the sky its colour.  Because a small part of the blue light is lost through this scattering, sunlight appears slightly yellow rather than pure white.

When the sun is very low in the sky, towards the end of the day (sunset) and also near the beginning (sunrise), sunlight has to travel much further through the atmosphere.  Blue light is scattered as before but, because there is so much more atmosphere to traverse, the blue light is eventually lost, so that red and orange colours dominate at sunset and sunrise.

But what about the colours in the eastern sky?  The layer I described as “hazy dark blue light” was actually the earth’s shadow, where our planet casts a shadow on the atmosphere as the sun sinks below the horizon.  As the sun falls further, this shadow layer increases, only to disappear eventually in to the deepening blue of the night sky. The red layer goes by the wonderful name of the Belt of Venus and arises from residual sunlight encountering dust particles in the atmosphere.  These particles scatter the light (red by now) backwards.

Thanks go to Hazel who had the idea for sunset watching.

12 thoughts on “The colours of a Dartmoor Sunset”