Not far from the quaint, walled harbour at Paignton in South Devon lies Roundham Head, a rocky headland that protrudes nose-like in to the sea. The northern part of the Head is a grassy plateau and views from here across the vast sweep of Torbay can be spectacular. Today, rust-red cliffs glow and the steel-blue sea sparkles; even the slew of white buildings scarring the Torquay hills acquires some dignity in this bright, late autumn light.

On the southern edge of the headland are the Cliff Gardens and promenade, built in the 1930s to protect the crumbly rock against sea erosion. Paved paths zigzag up and down the steep slopes between flower beds and the gentle microclimate allows many exotic plants to flourish, providing a haven for wildlife. Dotted around the Gardens are the distinctive Torbay palms and the stiff breeze rattles their leaves like an avuncular uncle ruffling the hair of his favourite nephew.

I know it is autumn but as I walk up and down the zigzag paths it seems that the plants are less sure about the season. Yes, there are swathes of cobwebby old man’s beard, mature olive-green ivy berries with their rich brown caps and the agapanthus has exchanged mauve flowers for massive green seed heads. But there are also gaudy splashes of lemon yellow scorpion vetch, hanging curtains of rosemary with their sparkling blue flowers, clumps of shrubby bindweed covered with their yellow-throated white trumpets and dense sprays of pink bergenia.

With all these flowers about and a sunny, mild day, I expect to see wildlife. Eventually my patience is rewarded by the buzzy arrival of a huge furry bumblebee queen. Despite her size she moves deftly among the plants, systematically probing the rosemary and bergenia flowers. She appears to be in very good condition, and, in the sunshine, her golden yellow stripes glow and her tail is a warm tan colour, so she must be a buff tailed (B. terrestris). Later I see several worker bumblebees collecting pollen from the rosemary so there are active nests nearby, even in mid November. It doesn’t surprise me any longer to find these bumblebees at Roundham Head; I have seen them even in January and February and I am beginning to think that they are active throughout the year. What did surprise me was to find two yellow and black wasps mating on a fleshy green bergenia leaf. They start end to end, lying back on the leaf, but eventually the larger female mounts the male. When they are finished the fertilised queen will find somewhere to pass the winter, the male will die, his job done.

From the top of the Cliff Gardens there are good views down and across Goodrington Sands. This popular holiday beach is quiet today, its cafes and beach huts closed for the winter. The sea here is more battleship grey than steely blue but I also notice tinges of yellow and green where the underlying sand shows through shallow water. The strong offshore wind creates ripple patterns on the sea and lifts crests of fine spray from the incoming waves.

Once the tide falls back, dog walkers and their canine friends appear on the beach in the sunshine. The still-wet sand is a mirror to the sun and the dogs and walkers become dark silhouettes. Elsewhere on the beach, curious low piles of sand appear in apparently random patterns, the work of local bait diggers. 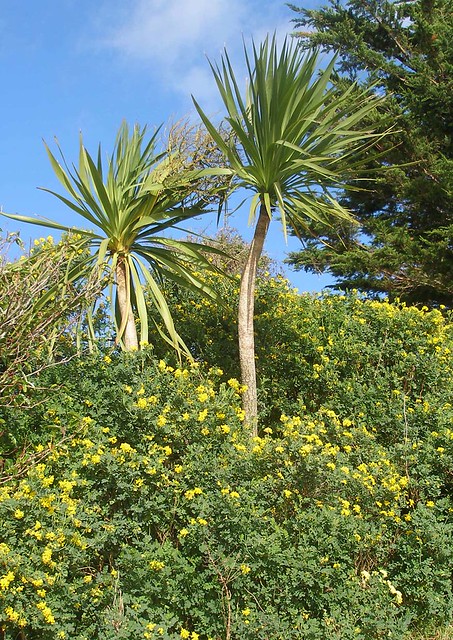 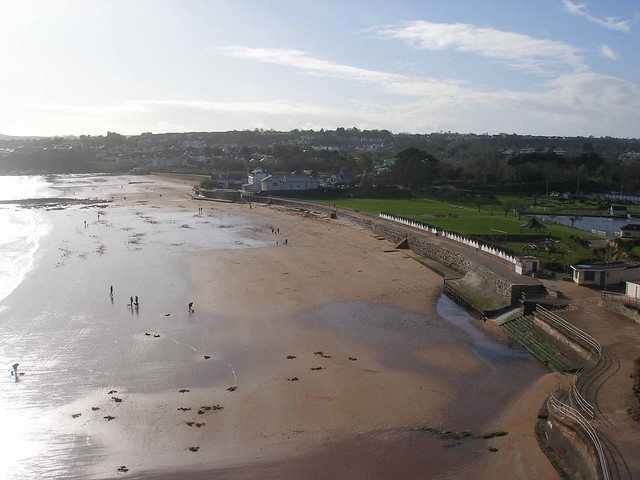 13 thoughts on “A rare dose of autumn sunshine”