The coast path in this part of South Devon traces the edge of the low crumbly cliffs as they meander around inlets and headlands, keeping the sea at bay. For several miles eastwards beyond Prawle Point, the path is mostly flat so this is easy walking but not without interest. The sea is an ever-changing canvas of colours and seals sometimes swim near the shore. On the landward side of the path a succession of gently sloping arable fields is backed by steeply rising cliffs with rocky outcrops, giving the walker the illusion of being watched from above, if only by birds of prey.

These coastal fields have been cultivated for centuries but for the last twenty years or more, management of the land has been directed towards supporting the nationally rare cirl bunting. This is a pretty songbird that, until the mid 20th century, was found in much of the southern half of the UK. Changes in farming practices, affecting the bird’s food sources and nesting habitat, led to a decline in the cirl bunting population and by 1989 there were only 118 pairs, confined to coastal South Devon. Since then, agri-environmental schemes have been promoted to support the bird. Spring barley has been sown on coastal fields and stubble left in the winter to provide food for these birds. Wide, uncultivated field margins allow tussocky grass to grow and insects to thrive, providing summer food. Nearby hedges are maintained as nesting sites. By 2009 the population had increased to 862 breeding pairs, a conservation success.

The cirl bunting is only one of several rare species found here and many scarce insects find nesting sites along this stretch of the coast. I recently went to look for the long-horned bee (Eucera longicornis), a nationally rare, solitary mining bee that is reported to be found here.

Just over two weeks ago, I drove to this remote part of South Devon and found my way down the very narrow lane to the National Trust Car Park at Prawle Point. The mid-morning sky was an overcast grey but, with only a light breeze, the air felt warm and humid. The car park is next to a nature reserve and one of the local residents, a lesser whitethroat, sang from a nearby tree as if to welcome me.

A short stroll down hill took me to the coast path and I headed eastwards along the low cliffs. With the lack of sunshine, contrast was low and colours were muted, but there was still much to see. Unusually, I paid scant attention to the sea; I was more interested in the plants growing nearby. The seaward side of the path is marked by a distinct band of vegetation along the cliff edge. Sometimes this is a fringe of low grass with self supporting flowering plants: pinkish-white umbrellas of wild carrot; scrambling legumes including common vetch with its feathery leaves and pink flowers and the tiny white-flowered hairy tare. Further along, growth is more substantial with tall bracken and bushes, sometimes so dense as to obscure the cliff edge. This barrier supports climbing legumes including tufted vetch and, where the blackthorn is well established, provides good nesting for the cirl buntings.

The landward side of the path follows the edge of the arable fields and their wide, uncultivated margins. The luxuriously green spring barley fretted in the light wind and, in the field margins, rough grass prospered together with more wild carrot and many leguminous plants including more common vetch. I also saw large mats of kidney vetch sporting a mixture of lemon yellow flowers and feathery- cushioned white seed heads.

Despite all this apparent fertility and forage, insects were keeping a low profile with the exception of a few small bumblebees. Eventually I came to an area of rich, tall bracken and low bushes growing along the edge of the cliffs. One section of this cliff hedge had been colonised by purple-flowered tufted vetch scrambling through the bracken. Something moving, possibly an insect, caught my eye and I paused to look more carefully. After a few minutes another appeared and I thought I saw the distinctive long antennae of the long-horned bee. I could also see pale brown hairs but the bee was moving about quickly making it difficult to be sure whether this was all just wishful thinking.

I waited and an intermittent stream of these insects then passed through, some moving around quickly, some stopping to feed on the purple flowers. They were about the same size as a honeybee and I could see their impossibly long antennae, the very pale front of their heads and the fringe of beige hairs around their thorax. These were definitely male long-horned bees and it was very exciting to see them for the first time. According to Steven Falk, fresh specimens have russet coloured hairs which fade after a few weeks so the bees I saw must have been flying for a while. One of the passers-through had pollen-loaded legs so I assume this was a female but she didn’t stop long enough for me to be sure. 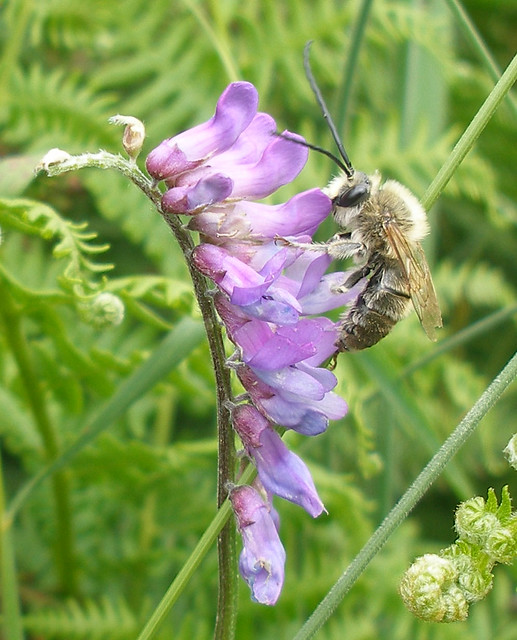 By now there was fitful sunshine and I began to be aware of the other sights and sounds around me. Through the curtain of bracken and long grass, the sea was visible, taking on a kaleidoscope of new colours as the weather improved. The urgent metallic sound of cirl buntings echoed around the surrounding hills and coming from below I could hear the plaintive cry of oystercatchers and the gentle soughing of the waves.

Long-horned bees used to be found across the southern part of the UK but they have suffered a drastic decline in the latter part of the 20th century. The decline has been due to loss of suitable nest sites and preferred forage.