It’s coming on Christmas,
They’re cutting down trees.
They’re putting up reindeer
And singing songs of joy and peace

From River by Joni Mitchell

It’s only a week or so until the shortest day and, in the town, the Christmas lights have been twinkling merrily since late November. Shop windows struggle under the weight of gifts and expectation and there has been an outbreak of Christmas Fayres in local schools and nearby villages. Totnes will soon host its own festive late-night shopping events. Perhaps all this brashness and brightness is an antidote to the greyness handed out by the recent weather.

My overriding impression this November was a lack of sunshine although there must have been some to produce the rainbow captured in the photograph. We also had our first frosts, waking up to white roofs, and on other days we were buffeted by heavy rain and strong winds which finally disposed of the leaves. The view from my kitchen window changed during the month to one dominated by bare branches.

Down in the Leechwell Garden, November was a time of seeds and fruits. I remarked a month or so ago on the “almost perfect green spheres tinged subtly with red”, the crab apples. I wondered how these would mature and I now have my answer. By November they were looking distinctly worse for wear and the “green tinged with red” had transmuted to a sickly yellow-orange. Some fruits had fallen off altogether and some were rotting, having been attacked by predators. I discovered the identity of one of the predators as I stood under the tree with my camera. A blackbird landed above me, took a casual peck at one of the fruit and flew off in disgust.

The blackbird may also have been responsible for damage to some chunky overripe rose hips nearby. The same bird will probably be back, when the time is right, to sample the berries offered by a cotoneaster. The shrub already seemed to be spreading its arms to make the berries more accessible.

Beneath one of the flowering quinces I found three golden fruit lying on the ground near the old stone wall. Whether they were just overripe or whether the blackbird had been at them, I don’t know. They looked very tempting but I am told that to humans the fruit are unpalatably bitter unless cooked. I deliberately left the bottle in the picture as it highlights one of the problems faced by a public garden. Whereas most people enjoy and respect the Leechwell Garden, a few people see nothing wrong in lobbing a bottle over the wall as a means of convenient disposal.

Perhaps I am being too hard on the blackbird. It has to get its food somewhere and there is an interesting biological chain beginning with sunlight falling on leaves, this energy leading via photosynthesis to tree growth and eventually to fruit which are eaten by the blackbird. Pollinators have a role in there as well. These chains and their relationships feature strongly in the nature writing of Mark Cocker, recently compiled in a new book (Claxton – Field notes from a small planet). Cocker sees the calls of swifts and swallows as a transmutation of “insect protein converted through the birds’ digestive system into the music”. Should I see the chiding call of the blackbird as a transmutation of the photosynthetic activity in the leaves of the crab apple tree?

Down in the shadier part of the Garden, the spindle tree continued to light the way. In September, I commented on the shocking pink fruits. By early November, these fruits had opened to reveal bright orange seeds and more gaudiness. By the end of the month, only the pink seed casings remained, looking like tiny ornate lampshades. Another splash of temporary colour came from the ginkgo tree which glowed briefly as though a switch had been flicked and then promptly lost all its leaves.

Even this late in the year a few plants seem determined to try to give us colour. Among these survivors were the mullein, still painted in splashes of yellow, some rosemary showing new mauvish-blue blossom and a bloody cranesbill with its small magenta flowers . A borage also had a few blue flowers but they didn’t look properly formed. 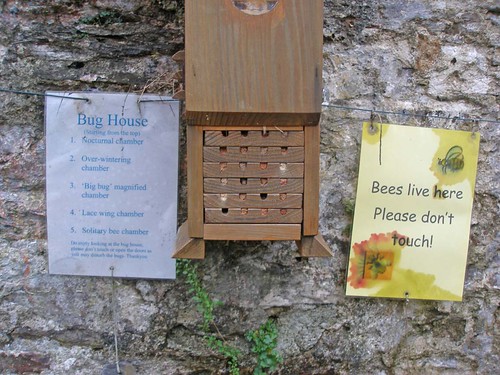 The Leechwell Garden was, for many years, an orchard so it seemed fitting that three apple trees were planted late in the month. Two dessert varieties popular in the 19th century, Laxton’s Superb and Ribston Pippin were planted together with a James Grieve, “the classic Scottish cooking apple” but, in my experience, very good eaten raw. The three varieties seem to have been chosen partly to allow cross pollination but they will need the insects, especially the mason bees from the bug house, to do their bit in the spring.

7 thoughts on “A blackbird, some old apple trees and a deserted bench – the garden in November”