We picked our way carefully down the steep, stony path to the beach at Mansands, one of the many small coves dotted along the South Devon Coast. At this time of year, the banks lining the path celebrate the season with silky draperies of “Old man’s beard” punctuated by bonfire-sparks of red rose hips and great outbursts of flowering ivy. Pale sunshine coaxed a sickly sweet perfume from the ivy flowers and encouraged a busy profusion of wasps, hoverflies and honeybees but we were hoping to spot another kind of insect. Suddenly my attention was grabbed by a different shape and there it was: marginally longer than a honeybee, its abdomen slender and pointed with clearly defined regular stripes of black and yellow. This sleek insect was an Ivy Bee (Colletes hederae), with a fringe of russet hairs around the thorax and its manner of browsing the ivy flowers in a crescent shape. We saw a few more but they were elusive and moved about quickly. It didn’t matter, we had seen our first Ivy Bees! 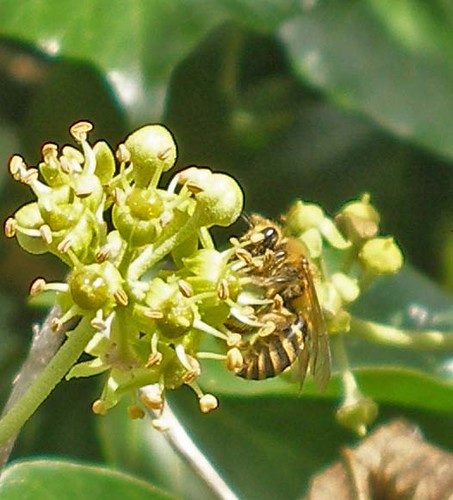 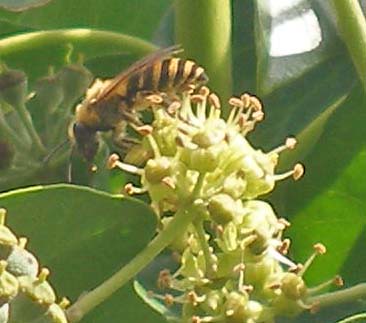 I was pretty sure that if there were Ivy Bees about, there must also be nests nearby but the conundrum was how to find them. At other sites in Devon, the nests are said to be near the beach so that seemed a good place to start the search. Ivy Bees generally choose soft friable soils to build the tunnels that form their nests. The beach at Mansands is book-ended by south-facing cliffs containing buff-coloured sandy soil, some shale and some rock. Scrubby grass provides cover in places. This is probably an ideal environment for these bees and, when I looked, I saw many small holes pock-marking the cliffs. Numerous bees were buzzing around and based on their patterning and shape these were probably Ivy Bees. Rather like commuters at a busy rush-hour railway station, some bees were going in and out of the holes and some were moving about, occasionally colliding with others. The nests were distributed along a stretch of cliff about 50 metres wide; there must be thousands of bees here. It seemed too easy but, almost by accident, I had stumbled across a massive Ivy Bee settlement, a truly impressive natural phenomenon.

When I looked more closely, I noticed that the female bees returning to their nests carried chrome-yellow pollen along their legs, looking as if they were wearing bright yellow lycra cycling shorts. They mostly disappeared in to the holes presumably to unload the pollen to provide food for their larvae. A few returning females rested on blades of grass before entering their nests. As they cleaned themselves, they were bombarded by other bees. These may have been hopeful males but the females showed no interest at all, having probably already mated.

The Ivy Bee is a relative newcomer to the UK having been first identified on mainland Britain in Dorset in 2001. Since then it has colonised many sites along the south coast and is also spreading north. It is the last solitary bee to emerge, flying between early September and early November. It shows a strong preference for pollen and nectar from ivy although it will feed from other sources. Some call it a mining bee as it digs tunnels for its nests but others refer to it as a plasterer bee from its habit of lining the nest with a protective cellophane-like coating. Although it is a solitary bee in that it does not form cooperative colonies, many Ivy Bees tend to nest in the same area.

There are two other solitary bees that are on the wing around this time and which could be confused with Ivy Bees. The sea aster mining bee (Colletes halophilus) looks very similar but it is confined to salt marshland on the East and South East coasts of the UK. Another look-alike is Colletes succinctus but this is a bee of heather moorland. The Mansands bees are unlikely to be either of these species, especially as there are large banks of ivy in the area.

These Colletes hederae are the last solitary bees I shall see until next spring and I can’t help marvelling at their behaviour. Ivy Bees spend a frantic period of roughly eight weeks on the wing when they have to mate and build nests. They must also lay eggs and provide them with supplies of pollen and nectar, helping to pollinate the ivy along the way. During the next ten months the miraculous transformation of egg to larva to pupa to bee occurs but we don’t see any evidence of this until the new bees emerge next year and the cycle starts again.

We visited Mansands on October 3rd 2014;  the photos were taken by Hazel Strange.

I should like to thank Amelia, who writes two fascinating blogs: A French Garden and Bees in a French Garden, for kindling my interest in solitary bees.

8 thoughts on “We see our first Ivy Bees!”