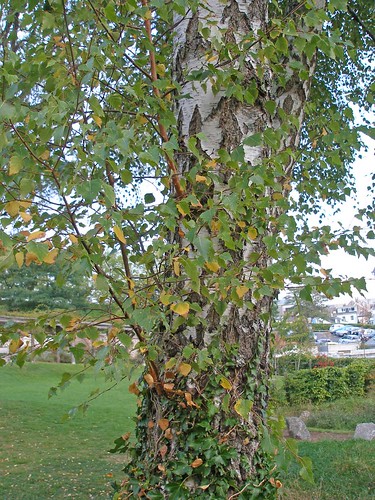 Early in the month, autumn was more of an idea than a fact but as September progressed, the predominantly green view from my kitchen window gained increasing yellow and brown tinges. But this was no New England “Fall”, rather a gentle and gradual transformation as the new season took hold. In particular, I watched the three silver birches become increasingly flecked with yellow, transforming their foliage in to a patchwork of bright yellows and dull greens which glowed in the light of the morning sun. By the end of the month, yellow had overtaken green and a thin carpet of autumn leaves began to form under the trees.

Down in the Leechwell Garden the signs of autumn were clear although a few residual flowers struggled on. These were received gladly by the bees and I saw them enjoying the thick pink mop heads of sedum and the pendulous white trumpet-flowers and deep red chandelier-bracts of Himalayan honeysuckle (Leycesteria formosa).

A mullein that had overbalanced under its own weight to form a surprising arch sprouted vertical shoots and flowers as if desperately trying to grab the light; an occasional bee deigned to try these late offerings.
By the end of the month, ivy growing on walls outside the Garden had flowered and the huge clumps announced themselves with their sickly-sweet smell and insect-hum. The bees were lured by this sudden profusion of pollen for a final binge of the year but many other insects also contributed to the ivy-buzz.

Away from the flowers, interest this month has been provided by fruits and seeds as the plants and trees shut down for the season.

A few squidgy white fruits appeared on a snowberry (Symphoricarpos) and, looking at them, I was transported back nearly half a century to a primary school playground where we used these as ammunition. No-one told me at the time that the fruits were highly poisonous but had I eaten one, their strongly emetic effects would have expelled the berry before I succumbed!

In a somewhat gloomy corner of the Garden, a low shrub glowed with surprising pink leaves and even pinker fruit; this is a Spindle tree (Euonymus Europaeus). There is something slightly unsettling about the fruit with their bulbous four-lobed structure and brash colour. From Cathy, on her Words and Herbs blog, I learnt that the fruit are termed Bishop’s Hats in Germany; this seems most appropriate and the bishops refer to the colour as amaranth. A euonymus gets a mention in one of my favourite poems, “A subaltern’s love song” by John Betjeman. I believe Betjeman chooses the shrub as a symbol of mid 20th century suburbia. Read it to find out!

On the Crab Apple I noticed a few fruit: almost perfect green spheres tinged subtly with red. I am not sure why there are so few fruit given the number of pollinators in the Garden and I shall be intrigued to see how these mature as by last December the residual fruit were yellow.

The blueish needles of a cedar (Atlas Cedar I think) made a statement, and the tree was also adorned with squashy pollen-laden pale brown flowers. The plentiful pollen will be wind-carried from these male flowers to the female flowers higher up the tree to form cones.

September this year has been notable for its lack of rain and mild temperatures. Although this has not been good for gardeners, it has prolonged use of the Leechwell Garden by visitors and local residents especially those with children. An unexpected use of the Garden this month was as an outdoor classroom for one of the town’s primary schools. Groups of small children in the Garden gathered around one of the benches with their teacher or ran through the water – mums and dads will have been pleased! The teachers used the Garden in this way when rebuilding work at the school was delayed by the unexpected discovery of contamination. The school occupies land formerly used as the site of the town’s Victorian gasworks and, during the rebuilding, underlying soil was found to be contaminated with arsenic, lead and benzopyrene.

7 thoughts on “Crab apples, arsenic and suburbia – the September garden”