Five hundred or so years ago, it was common practice to celebrate the end of winter and the arrival of spring by “going a maying” or “bringing in the may”. On May Day eve, men and women disappeared in to the woods to emerge the next morning carrying flowering branches of the may tree to decorate their houses. A large branch formed the maypole, acting as a focus for dancing. There are few descriptions of their nocturnal activities; this is probably just as well as it seems unlikely that they had spent the night discussing the contemporary political situation.

In 1595, Thomas Morley published his well known madrigal, “Now is the month of maying”, a hymn to these springtime frolics. Here is the first verse:

Now is the month of maying
When merry lads are playing

Each with his bonny lass
Upon the greeny grass

As well as the obligatory fa la las, the song rejoices in dubious double-entendres linked to the woodland wanderings of those naughty medieval lads and lasses. If you would like to hear the song in full, have a look here, but promise not to laugh.

Nowadays, I feel sure that we are still affected at some deep level by the increasing warmth and light of the longer days but, despite this, we celebrate May Day in a much more restrained manner. Thomas Morley’s madrigal is sung from various church towers, Morris dancers drag themselves out of bed to herald the new morn, Hobby Horses appear in some towns, maypoles are danced around and May Queens are crowned.

The Leechwell Garden in Totnes got in on the act this year by holding its Spring Event in the middle of the month. On a sunny Sunday morning, the Garden was decorated with bunting and flags. Tables were put in place and covered with canopies to make the stalls, one selling teas and delicious cakes, another well-stocked with plants for sale. There was a book stall and tombola, a children’s face-painting tent and a nature table explaining the background to the Garden. A steady stream of people arrived, some lounged on the ground enjoying the glorious sunny weather and beautiful surroundings, tea and cake were consumed, children played. 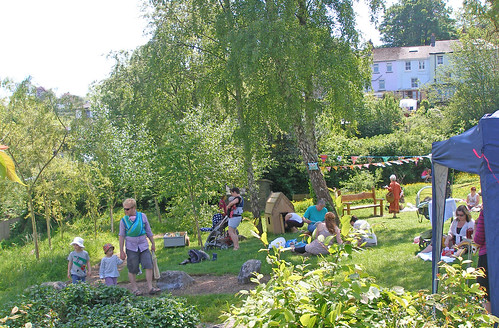 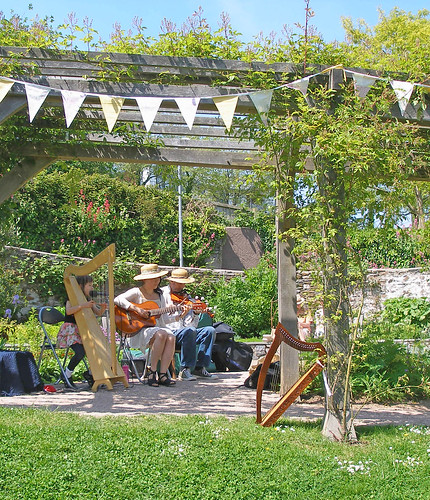 The Mayor, Jacqui Hodgson, arrived to provide gravitas and to unveil the new rustic benches. She gave a short speech and then ceremonially removed the covers from the benches.

During the unveiling ceremony, Shirley Prendergast recounted how the 3 inch thick plank used to make the chess board-bench should by now have been sailing the high seas. It was felled in Torbay to provide the keel for the Grayhound, a replica of a 1776 lugger, launched in 2012. The wood was, however, not quite the colour needed and so the Leechwell Garden inherited it.

This was a lovely relaxed event. New people were introduced to the Garden, fresh acquaintances were made and a pleasant afternoon was passed. £900 was raised to help with the Garden’s running costs.

The May weather with its alternating warm days and wet days has been very good for the Garden providing near-ideal growing conditions; I have heard more than one person this year refer to their own garden as looking “lush” and this certainly applies to the Leechwell Garden. Aside from the Spring Event, there has been much to see in the Garden.

Early in the month, the crab apple developed a rash of small round pink buds which opened to a sudden snow-fall of white flowers. By the end of May, the petals had melted leaving a new crop of fruit which will swell as the year moves on.

In the herb garden, delicate violet flowers decorated a sage plant and a bloody cranesbill was covered with magenta “eyes”.

The clematis on the pergola have continued to entertain. Early in the month, a cascading pink waterfall of flowers covered the Montana Elizabeth. The Duchess of Edinburgh tantalised with her chunky, pale green buds whose developing petals reminded me of the “dead man’s fingers” of a crab. These unusual structures metamorphosed in to delicate, double white flowers.

In the damp ground near the bridge, a stand of yellow flag caught the eye with tall green stems and vibrant lemon yellow flowers.

All around us now is the feeling of early summer and nothing typifies that more than the joyful screeching of the swifts. We saw them for the first time on May 5th flying at high speed above the Garden, shouting, swooping, gliding and suddenly turning as they relished the insect-filled air. With their spitfire-like flight, they are a pleasure to watch but they will gone again by early August.

9 thoughts on “Springtime frolics, sudden snow-falls and careening swifts – looking back at the May garden”