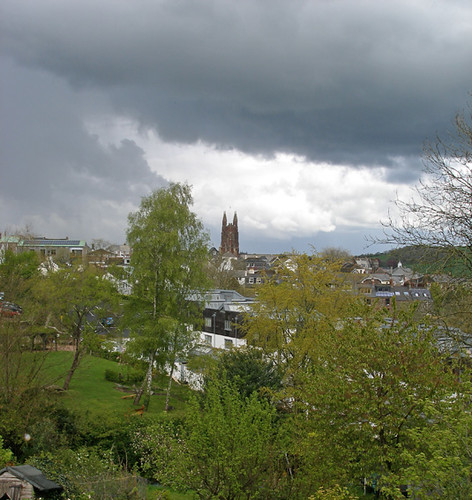 It’s a favourite time of year for me, I like the feeling of everything starting afresh and alive. Shakespeare gets it right for me in Sonnet 98
When proud-pied April dress’d in all his trim
Hath put a spirit of youth in every thing,

Others, however, see April as a time of hopes and aspirations that can never be fulfilled. TS Eliot began his poem The Waste Land: “April is the cruellest month” and, in Spring Edna St Vincent Millay wrote “To what purpose, April, do you return again?”

I don’t share their pessimism; I know autumn will come and these new leaves will wither and fall, but I also know that there will be another season of growth next year.

Down in the Garden, there has been much to see. Three new rustic benches have been installed making it even better for people to visit and spend time here. On the pergola, the clematis continue to entertain.

Another clematis, a Montana, has been covered with round pinkish buds resembling small grapes.

In the herb garden, a burgeoning patch of golden marjoram comes alight when the sun shines.

A clump of sweet cicely shows frothy white flowers above the fern-like, green foliage; the leaves of this plant are edible and have a mild aniseed-like flavour with sugary overtones.

Several spikes of borage seem to have appeared from nowhere as if called to stand to attention. Bees love borage; the plant is sometimes called Bee Bread so they will be eagerly awaiting the full opening of the flowers.

The far side of the Garden has a much wilder feel. A small bank of wild garlic (Ramsons) shows starry flowers beginning to appear above the fleshy leaves. Wild garlic is very abundant in the Devon countryside and the spring-smell of a woodland path lined with the plant is unmistakable. The leaves now find favour with celebrity chefs as a gentle garlic substitute.

In a hidden corner, I found some beautiful comfrey, another bee favourite. Its buds are a deep red and, once opened, there are clusters of bell-like flowers; that part of the flower nearest the plant is pale blue with the remainder being white. This unusual variety is Hidcote-blue comfrey.

Near the comfrey was an upstanding plant with copious green, heart-shaped leaves and small white flowers. This is garlic mustard or Jack-by-the-Hedge; when bruised or chopped, its leaves emit a mild garlic smell.

The bees are out and about and I have seen a common carder and a hairy footed flower bee on the white lungwort.

On April 20th I noticed a bird glide gracefully down between the trees to land on the grass. It was quite large, predominantly dark but with pale patches on its wings and my first reaction was that it was a buzzard. It stalked about the Garden, occasionally stopping to eat and with its long tale and dark plumage it reminded me of the proprietor of a posh French restaurant eyeing up his staff and clientele while keeping his hands clasped firmly behind his back. The more I looked the more I realised this was no buzzard and most likely it was a very large crow with a few pale feathers. The bird kept returning to the Garden and I found this puzzling until one day I saw it land on a nearby tree. On the tree was another crow sitting on a nest made of twigs balanced between two branches. Both birds are occasionally on the nest together; there will be a new crow-family before too long.

This is the fifth of my monthly reflections on the Leechwell Garden in Totnes. To see what I wrote in earlier months, follow the links at the end of this post or put “leechwell” in the search window.

Thanks to Hazel Strange for improving the photos I took on April 19, 26 and 27.

7 thoughts on “Bee bread, benches and a crows nest in the April garden”