Or so the traditional proverb tells us, but that’s not what happened this year, in fact it was almost the reverse. March gambolled in like a young lamb brimming with dry weather and sunshine. As the temperature went up, so people’s spirits rose and you could almost imagine it was spring.

A mid-month sunny Sunday stays in my memory: bright and clear, blue skies, one of the warmest days so far this year and lacking the mistiness of sunny days earlier in the month. From my vantage point overlooking the Leechwell Garden, I saw several families arriving with blankets and picnic lunches, probably bought at the bustling Food Market held that day in the civic square. Children played in the marrow-chilling water and probably frightened the tadpoles. Fathers exposed too much white flesh.

In a quieter corner of the Garden, I noticed a young woman sitting peacefully with her hands turned upwards enjoying the sunshine. I initially thought she was meditating but when she stood up and performed a series of deliberate, sculpted and fluid movements, I decided it was more likely yoga.
The Garden was doing its job by acting as a pleasant and welcoming community space.

Later in the month, March did leave like a lion but it was a bedraggled, shivering and slouching lion: the weather had turned cooler and wetter with some spirited hail storms. 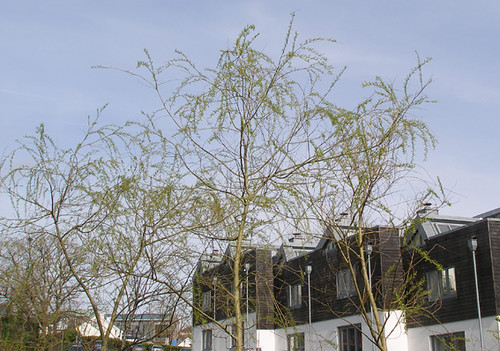 Despite the recent mixed weather, change still continues and a green haze of new leaves now covers several of the trees in the Garden. 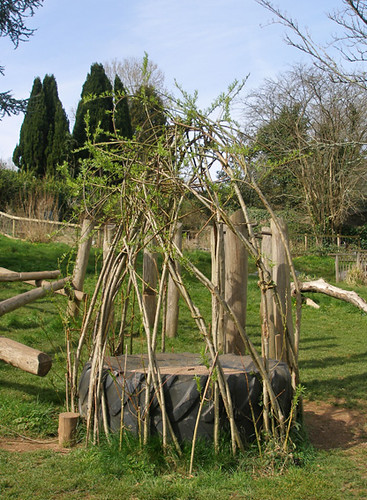 I was surprised to see new leaves also appearing on one of the installations in the children’s play area – I hadn’t realised it was a living willow sculpture. 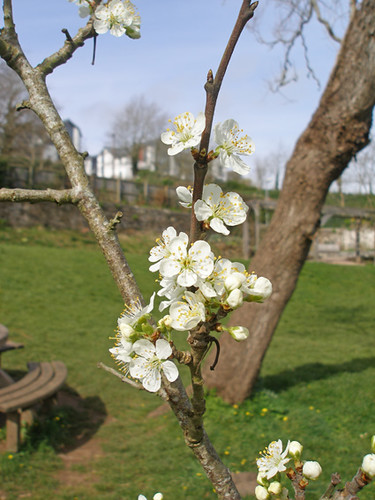 Elsewhere, a young fruit tree, I think it’s a plum, was, for a while, covered with white blossom, as if there had been a sudden blizzard. The snowy white petals on each flower were arranged in five fold symmetry around delicate yellow-tipped stamens. It’s a beautiful tree but I am concerned for its welfare: Garden visitors are giving it a bit of a battering and I wonder if it needs some sort of protection. 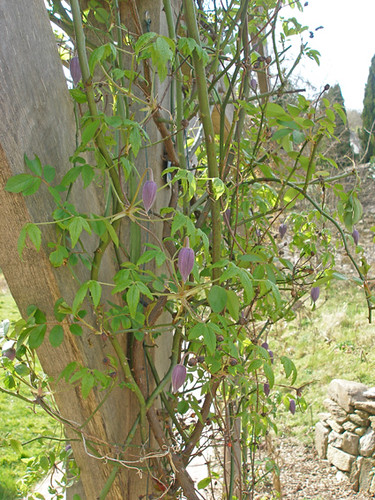 On the pergola, the climbers have cloaked themselves in green leaves but my attention was taken by the striking flower buds of an early clematis (Francis Rivis). The buds stand out against the green-leaved background as if someone had cried massive purple/blue teardrops which have been caught by the lush new matrix of leaves. 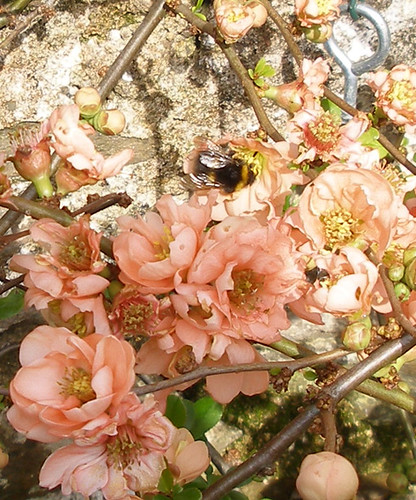 Against one of the old walls I found several flowering quince (Chaenomeles Geisha Girl) with their papery, double, salmon-pink flowers and buttercup-yellow stamens. A bumblebee shared my admiration and fed from the flowers.

Early in the month, Susan Taylor, one of the Garden volunteers came to see me with the exciting news that she had spotted a Hairy Footed Flower Bee in the sunshine on some rosemary growing against one of the old walls. The following day, I also saw one on a patch of lungwort in another part of town near the river. I noticed the staccato flight pattern and the loud buzz. Both bees were gingery coloured males who emerge first after the winter. The black females emerge about a fortnight later to mate with the waiting males before setting up a nest.

In the middle of the month, Susan told me about some different insects she had seen in one of the town centre car parks, not far from the Garden. I went to investigate and found a south facing sunny bank covered with flowering dandelions and celandine and sure enough there was also a host of small insects, between half and two thirds the size of honeybees. They were flying around in a purposeful manner, occasionally landing and occasionally feeding from the dandelion flowers. The underlying soil in the bank was fairly crumbly and I thought I could see some holes so I wondered if these were mining bees but I don’t think I can rule out the possibility that they are hoverflies. Here are some photos; any help in identifying these would be most welcome. 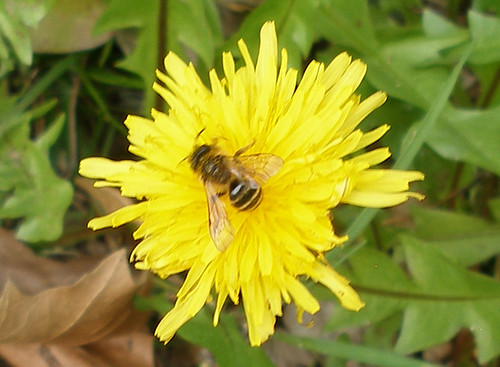 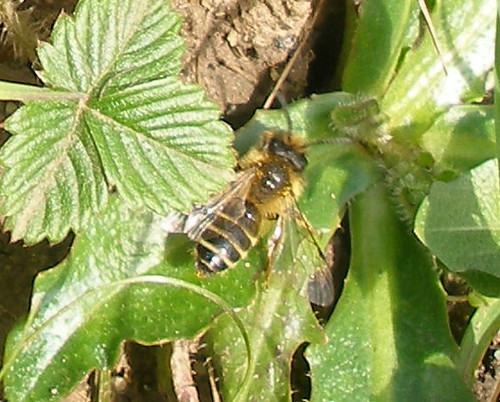 I did see two of the insects get together and form what I can only describe as a ball. A third came to join in but was seen off. I assume the two were mating and I wonder if they are solitary bees (Collletes), known for forming a mating ball. When these two had finished, one flew off immediately but the other stayed for a while, shaking legs and wings and putting everything in order, as though it was adjusting clothing rumpled in an embrace.

One sad story. Last month I described some trees covered with catkins growing near the edge of the Garden. The day after I posted the story, one of the local residents cut most of these down. The trunks have been left and I suppose they will grow back but it will take time. I can’t really see why they did this but I suspect it’s to do with wanting order. There is now much less for the birds and insects, nature likes a little untidiness.

I don’t want to end on a low note so I shall tell you about the tightrope walkers. These are two young women who come to the Garden to practise their art and they appeared on a recent sunny day. They have a plastic ribbon which they attach between two sturdy trees. The ribbon is about the width of a human foot and is suspended less than a metre above the ground. They hop deftly on to the ribbon, walk along it, they jump hoping to land on the ribbon again, they use only their outstretched arms to provide balance. At one point, they both got on to the ribbon at the same time but at different ends. They then advanced towards the middle before falling off in fits of laughter.